It was Marjorie Norris who reviewed the first episode of Doctor Who for The Stage and Television Today in 1963 (that review is here). Nearly two years later, she would cover Ian and Barbara's departure from the programme in this piece on the final episode of The Chase.

As before, her comments are perceptive and generous. It's also clear that she's been a regular viewer, whether for purely professional reasons or otherwise, since that opening episode aired.

If Norris is still alive - not easy to guess, without any idea of her age at the time of writing these reviews - it would be nice if someone could look her up and ask her to talk about her work, and about what she thinks of Doctor Who at 50 years' remove. For all we know, she might even have been watching on Saturday when Amy and Rory took their leave. 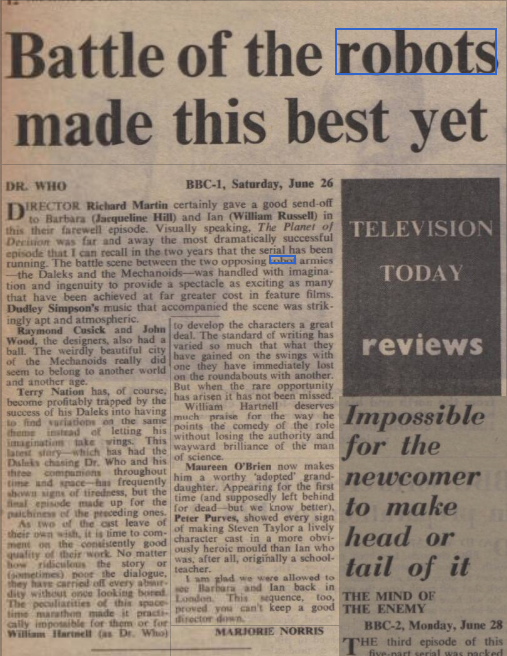 Battle of the robots made this the best yet

Director Richard Martin certainly gave a good send-off to Barbara (Jacqueline Hill) and Ian (William Russell) in this their farewell episode. Visually speaking, The Planet of Decision was far and away the most dramatically successful episode that I can recall in the two years that the serial has been running. The battle scene between the two opposing robot armies—the Daleks and the Mechanoids—was handled with imagination and ingenuity to provide a spectacle as exciting as many that have been achieved at far greater cost in feature films. Dudley Simpson's music that accompanied the scene was strikingly apt and atmospheric.

Raymond Cusick and John Wood, the designers, also had a ball. The weirdly beautiful city of the Mechanoids really did seem to belong to another world and another age

Terry Nation has, of course, become profitably trapped by the success of his Daleks into having to find variations on the same theme instead of letting his imagination take wing. This latest story—which has had the Daleks chasing Dr. Who and his three companions throughout time and space—has frequently shown signs of tiredness, but the final episode made up for the patchiness of the preceding ones.

As two of the cast leave of their own wish, it is time to comment on the consistently good quality of their work. No matter how ridiculous the story or (sometimes) poor the dialogue, they have carried off every absurdity without once looking bored. The peculiarities of this space-time marathon made it practically impossible for them or for William Hartnell (as Dr. Who) to develop the characters a great deal. The standard of writing has varied so much that what they have gained on the swings with one they have immediately lost on the roundabouts with another. But when the rare opportunity has arisen it has not been missed.

William Hartnell deserves much praise for the way he points the comedy of the role without losing the authority and wayward brilliance of the man of science.

Maureen O'Brien now makes him a worthy 'adopted' grand-daughter. Appearing for the first time (and supposedly left behind for dead—but we know better), Peter Purves showed every sign of making Steven Taylor a lively character cast in a more obviously heroic role than Ian who was, after all, originally a school-teacher.

I am glad we were allowed to see Barbara and Ian back in London. This sequence, too, proved you can't keep a good director down.