This obituary ran a week or two earlier than the very similar Guardian one (which you can read here).

They have a lot of content in common, including the mixup of facts regarding Jacqueline Hill’s appearance on television with Sam Wanamaker. Her role in The Shrike was actually over and done with before the TV moment that led to her first film role. Dates of reviews for The Shrike, as well as contemporary coverage here and here, bear this out. 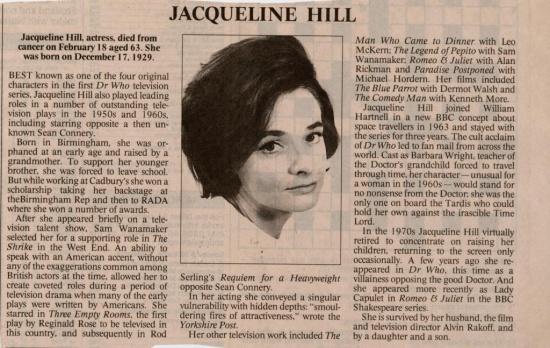 Best known as one of the four original characters in the first Doctor Who television series, Jacqueline Hill also played leading roles in a number of outstanding television plays in the 1950s and 1960s, including starring opposite a then unknown Sean Connery.

Born in Birmingham, she was orphaned at an early age and raised by a grandmother. To support her younger brother, she was forced to leave school. But while working at Cadbury’s she won a scholarship taking her backstage at the Birmingham Rep and then to RADA where she won a number of awards.

The rest of the article seems to be a transcript of the obituary. It is unknown if there was more besides it.

Also, where it says "here", there used to be several liks redirecting to what I think are newspaper cuttings, that sadly weren't archived.