A new feminist Doctor Who blog, Doctor Her, kicked off recently (I'm not involved, just became aware of it via Twitter). Today they put up a piece about Verity Lambert that might be of interest to readers here.

It was Lambert, of course, who approached Jacqueline Hill about playing the role of Barbara Wright. In the documentary Origins, Lambert said*:

Jacqueline Hill was not just the wife of one of my friends, she was a friend of mine. Very good actress. She'd been, I think, in America with her husband, Alvin Rakoff, who was a director. And was back in England and I thought, I don't know whether Jacqueline will do this, because, you know, she was one of the quite strong actresses playing very good parts. And I think it just rather appealed to her, the whole idea of doing something a bit different, and she said yes, which was great.

This frequently gets shortened to "Verity Lambert and Jacqueline Hill knew each other, and that’s how Jacqueline Hill got the part," or words to that effect, which rather undermines the professionalism of both parties. In fact I think Lambert and Hill are really interesting to consider together, if you're taking early Doctor Who as a jumping-off point for thinking about some of the challenges facing women of their generation. 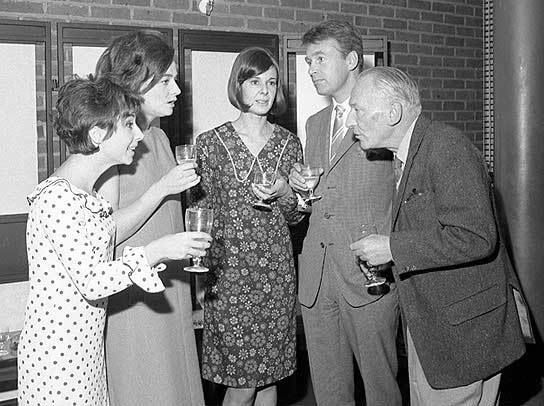 I'm not even supposed to be blogging today (I should be working, you know? To feed my family) so I don't have time to build a big post out of this, but in short: Lambert, as the post at Doctor Her points out, came from a relatively privileged background in terms of class and education, but still faced tremendous skepticism about her abilities as a young woman working in a male-dominated industry, accusations of sleeping her way into her job, and all the associated hurdles. Hill, on the other hand, came from a very poor background, was an orphan, and was forced to leave school at 14 to take a factory job** so that her brother could carry on with his education, boys being obviously more of a priority. They both had the odds stacked against them, in very different ways but in both cases partly as a consequence of simply being women.

Lambert was unarguably the more successful in career terms, but in extremely basic terms of how far they came from where they began, I think they're equally inspirational (and anyway, it's not a competition, of course). The fact that they ended up meeting, and working together on a programme as significant to the history of British broadcasting as Doctor Who, may not be of huge significance in its own right, but to me it's an important and pleasing part of the story of that programme.

*Rushing, so didn’t transcribe this myself but grabbed it from this page.