The five minutes that changed the life of Jacqueline Hill occurred between 9:10 p.m. and 9:15 p.m. a week ago to-day.

If you were watching television at that time you saw her, a tall brunette playing a five minute sequence from the play The Golden Boy, with Sam Wanamaker.

It was the first time she appeared on television: that was why she was in Shop Window, the television programme which introduces new artistes.

Perhaps you were impressed. Perhaps you shook your head and wondered what happened to young actresses like Jacqueline Hill after their first tilt at TV.

You had seen them before. More often than not you had never seen them again. But …

That's it. Another incomplete article with lost pictures.

The closest I could find was this. Not the same newspaper article, but also talks about Jackie's appearance in Shop Window.

The article (or what I think is part of it) is from Illustrated Magazine, from July 18 1953. 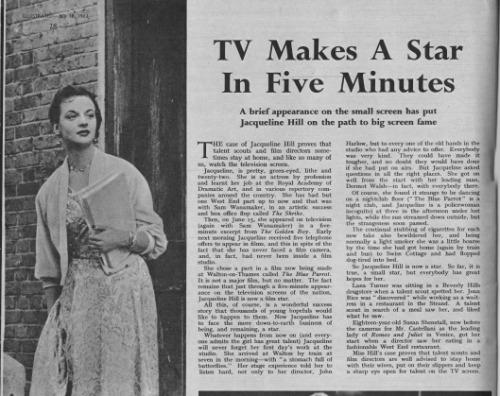 The case of Jacqueline Hill proves that talent scouts and film directors sometimes stay at home, and like so many of us, watch the television screen.

Jaqueline is pretty, green-eyed, lithe and twenty-two. She is an actress by profession and learnt her job at the Royal Academy of Dramatic Art, and in various repertory companies around the country. She has had but one West End part up to now and that was with Sam Wanamaker, in an artistic success and box office flop called The Shrike.

Then, on June 15, she appeared on television (again with Sam Wanamaker) in a five-minute excerpt from The Golden Boy. Early next morning Jacqueline recieved five telephone offers to appear in films, and this in spite of the fact she has never faced a film camera, and, in fact, had never been inside a film studio.

She chose a part in a film now being made at Walton-on-Thames called The Blue Parrot. It is not a major film, but no matter. The fact remains that just through a five-minute appearance on the television screens of the nation, Jacqueline Hill is now a film star.

All this, of course, is a wonderful success story that thousands of young hopefuls would like to happen to them. Now Jacqueline has to face the mere down-to-earth business of being, and remaining, a star.

Whatever happens from now on (and everyone admits the girl has great talent) Jacqueline will never forget her first day's work at the studio. She arrived at Walton by train at seven in the morning-with "a stomach full of butterflies." Her stage experience told her to listen hard, not only to her director, John Harlow, but to every one of the (?) hands in the studio who had any advice to offer. Everybody was very kind. They could have made it tougher, and no doubt they would have (?) if she had put on (?). But Jacqueline asked questions in all the right places. She got on well from the start with her leading man, Dermot Walsh-in fact, with everybody there.

Of course, she found it strange to be dancing in the nightclub floor ("The Blue Parrot" is a night club, and Jacqueline is a policewoman (?)) at three in the afternoon under hot lights, while the sun streamed down outside, but the strangeness soon (paused?/passed?).

The continued stubbing of cigarettes for each new take (?) bewildered her, and being normally a light smoker she was a little (?) by the time she had got home (again by train and bus) to (?) Cottage and had (flopped?/dropped?) dog-tired into bed.

So Jacqueline Hill is now star. So far, it is true, a small star, but everybody has great hopes for her.

Lana Turner was sitting in a Beverly Hills drugstore when a talent scout spotted her. Joan Rice was "discovered" while working as a waitress in a restaurant in the (Stroud?). A talent scout in search of a meal saw her, and liked what he saw.

Eighteen-year-old Susan (?) now (?) the cameras for Mr (Castellacti?) as the leading lady of Romeo and Juliet in Venice, got her start when a director saw her eating in a fashionable West End restaurant.

Miss Hill's case (proves?) that talent scouts and film directors are well advised to stay at home with their wives, put on their slippers and keep a sharp eye open for talent on the TV screen.