'I said to Jackie, "Let's do Separate Tables, the Terence Rattigan play"': recollections from William Russell

A Radio Times interview with Russell. I believe this is quite recent.

At the time of posting, it still comes up in a Google search, but I can't get the page to load and I suspect its availability may be ephemeral. So rather than excerpting with a link, I've copied the entire piece from the Google cache, which is dated 16 August 2011 (not that this is necessarily the date of the article).

It’s unbearably sad, what he says about Jackie, but some of it is sweet as well. At any rate, I think it probably belongs here. He mentions the Birmingham connection they shared, as well as Jackie's time at Cadbury's. 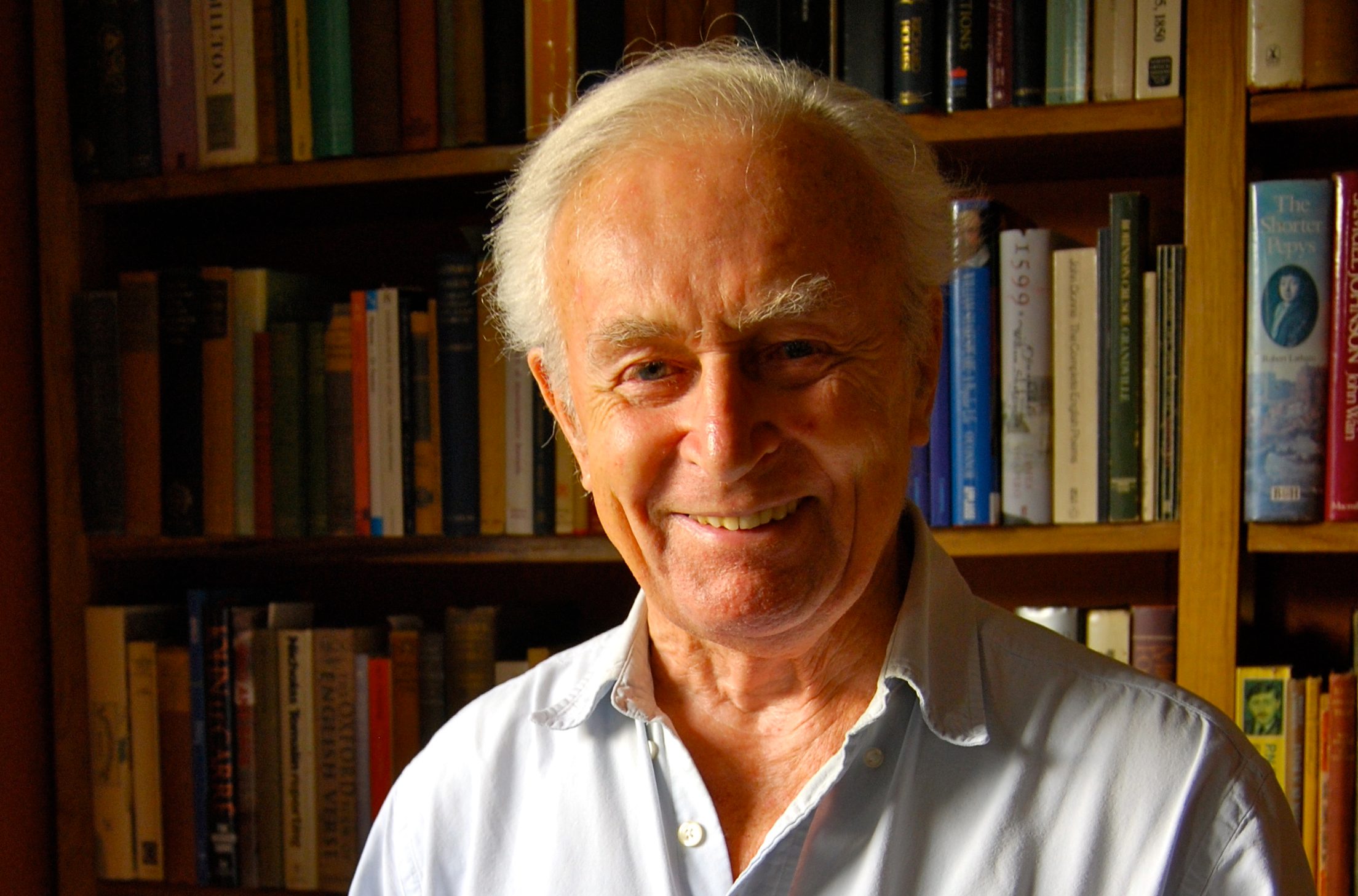 With a career reaching back to 1949, taking in Lancelot, Nicholas Nickleby and Rita's second hubby in Corrie, William Russell is still best known for Ian Chesterton, Doctor Who's first male companion (1963-65). Now in his 80s and living in north London, he shares his Tardis travels with RT's Patrick Mulkern…

So really Ian was the first proper hero in Doctor Who?

He was indeed. Verity [Lambert, producer] invited me to the BBC for lunch and I said to her, "So I'm the action man?" and she said, "That's exactly right." She told me that Bill [William Hartnell] would play the leading role, but not be doing the fights. I was delighted.

Verity was exceptional in many ways and became enormously successful in television. But at my first meeting with her, she was so young and bright, and I couldn't quite believe she was going to be the producer. I was used to these old BBC gentlemen.

What do you remember of the first story?

We had to do a bit of filming at Ealing Studios. It was for the end of one of the episodes and the four of us were in a very frivolous mood that day. Bill, Jackie [Hill] and Carole [Ann Ford] and I had discovered we had the same sense of humour. We’d had a very good lunch and been hanging around all morning not doing anything and then suddenly they wanted to film.

The scene was escaping from the prehistoric characters and running back to the Tardis. But we kept teasing the old BBC cameraman, who was trying to line us up. We were a bit naughty, I suppose. And then the rest was in Lime Grove. I remember driving my little car, Jackie beside me, in the fog towards the junkyard where we discovered the Tardis. 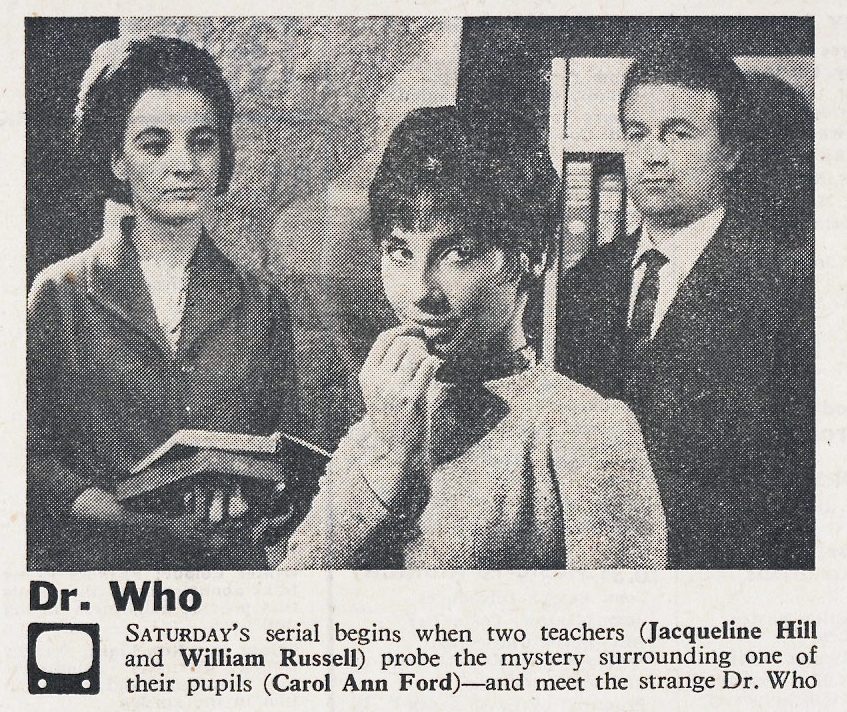 You had to record that first episode twice.

Yes, we all went to see it – the cast, Verity and Waris [Hussein, director] – and we were all sitting there at the end and Sydney Newman [Doctor Who's creator] stood up and said, "Do it again, Waris!" Subtle changes had to be made.

I'd played Nicholas Nickleby in Studio D, the tiny drama studio [in 1957, below]. Live television, on a Sunday and then acted again on the Thursday. It was all very crushed. 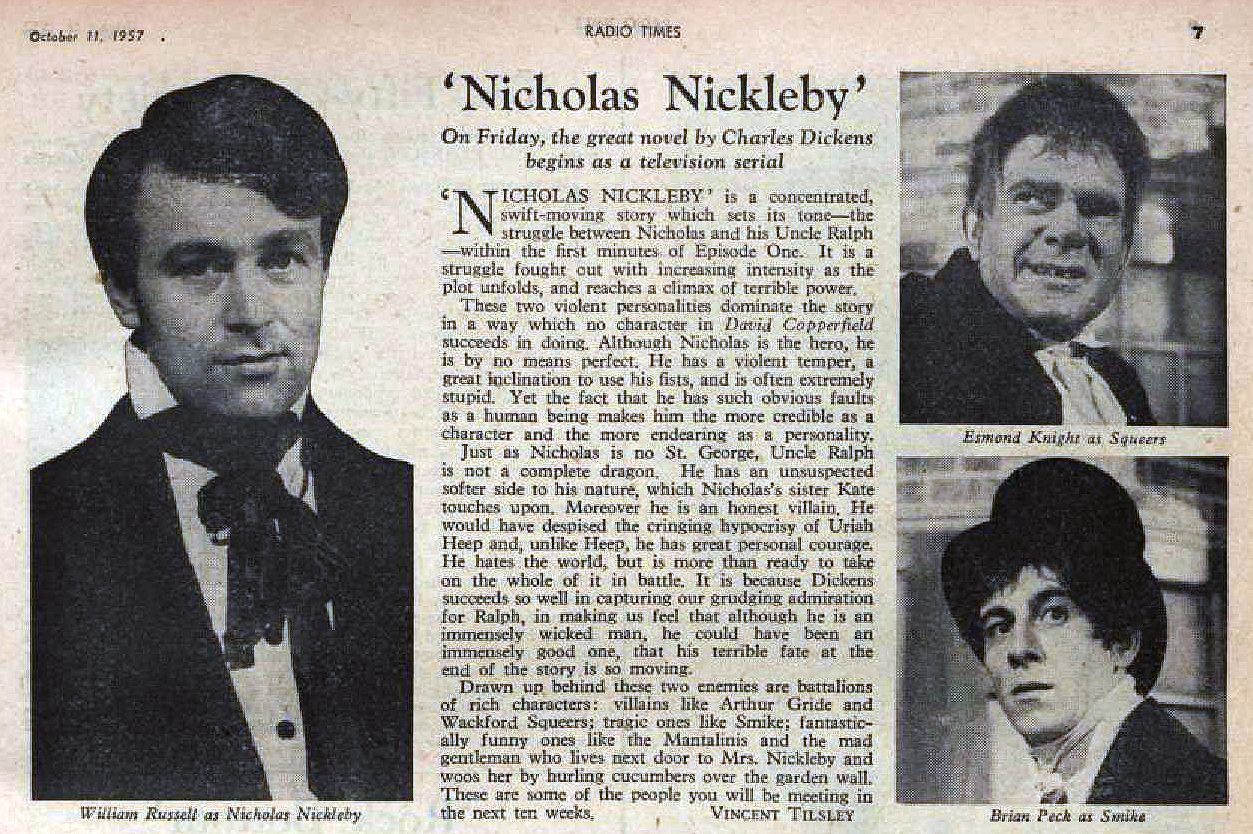 And once you put the huge Tardis set in there, well… It took a while getting used to the Tardis, with the wobbly doors and that extraordinary thing in the middle like a cinema organ going up and down. That was temperamental. Everything in the set had to be coordinated: the lighting, and all sorts of sound effects connected to movement. When we eventually moved into TV Centre [in White City], we were all amazed because at last we had some space and could do things properly.

Which stories do you remember with particular fondness?

The first one – so many laughs in rehearsal with the cavemen. It was extremely well acted. Not so easy to do when you're saying, "Me want fire!" I enjoyed the history ones especially. Marco Polo was wonderful. The costumes were beautiful. It was Waris's big return to us, but it's one that's disappeared from the archives. 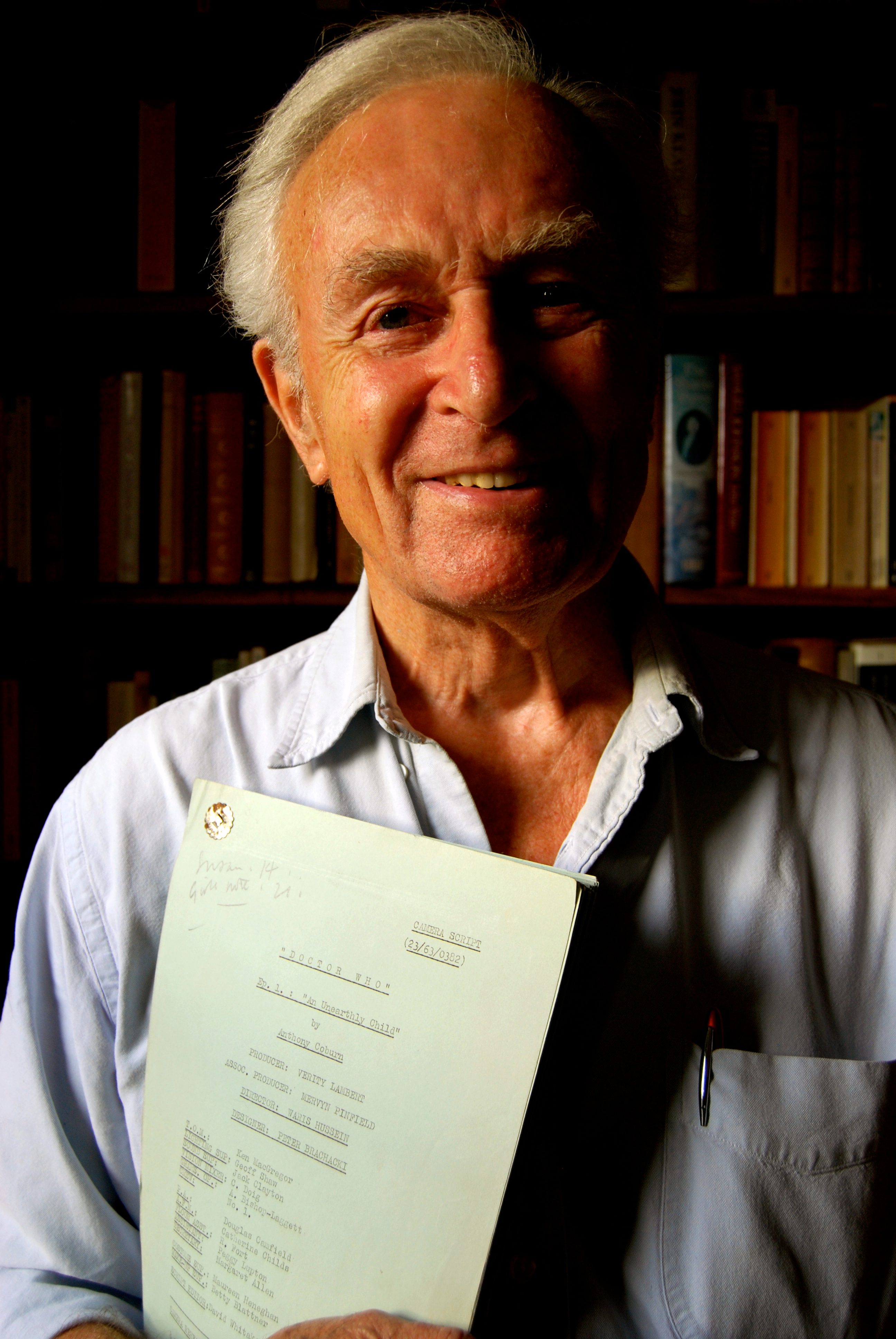 [William Russell at his London home in 2010, reunited with the camera script for the very first Doctor Who episode (Radio Times/Patrick Mulkern)]

You did three stories with the Daleks. What did you make of them?

Well, at first we thought they were laughable. Mind you, we were introduced to them without their tops on. Just an actor sitting in this sort of bathtub base. But when we started working with them, you could see how they'd become convincing. I had three young children at that time and they used to queue up behind the sofa and keep disappearing at different points. I had to pull out the creature inside.

You don't actually see anything much in the episode, but it was a horrible thing – like an awful jellyfish. In those days people didn't really know there were little men inside working everything.

What memories do you have of your co-stars? William Hartnell…

I got on very well with Bill. I admired him so much as a film actor. One of the first films I ever saw was Brighton Rock. He was terrifying in that. He had a quality I loved, which was that he was dangerous. It's a remarkable ability for an actor when suddenly they can turn and give you a shudder – a tingle down your spine. And he was humorous too. He started in farce or light-hearted comedies. He had lots of jokes about those times.

He really was such a good actor and he enjoyed it all so much. I've heard lots of stories about him forgetting his lines, but I don't remember any of that. Of all of us, he was absolutely there, in the moment, all the time.

And Carole Ann Ford who played the Doctor’s granddaughter Susan…

Carole was ideal to play this strange sort of person. She does have a remarkable otherworldly resemblance. She really looked "not quite one of us". She felt disappointed because she thought she was just shouting, "Help!" or "I'm stuck." She'd thought there was going to be more to the role.

And then Maureen O’Brien took over as space orphan Vicki.

Maureen was marvellous. She didn't compete with Carole as an otherworldly character, but was recognisable as a bright young teenager of that period. She's a very intelligent young actress. Well, she's not so young any more. None of us are. She's become a novelist. In fact, I went to one of her book launches with Verity a few years back.

Your closest relationship must have been with Jacqueline Hill who played Barbara.

I loved Jackie. She was a very attractive woman, and we had lots of shared memories because we were both Midlanders. She'd been a Cadbury's girl at Bourneville in Birmingham. We'd talk together in a Brummy accent.

You stayed in the series for a year-and-a-half. What prompted you to leave?

That's just me, I’m afraid. I never intended it should go on as long as that. I'm always looking for a chance to get back to the theatre. At the end of our time on Doctor Who, I said to Jackie, "Let's do Separate Tables, the Terence Rattigan play." It was a chance for both of us and we did a little theatre tour. We weren't crying to be leaving. I'm always looking forward to the next experience. You have to as an actor.

Did you stay in touch with Jackie?

Oh yes. Verity was also a close friend of hers. I now know why we didn't see so much of Jackie before she died because she was changing so much with the disease. It was awful but she was really stricken and didn't want to see us. I was always ringing her up and saying, "Come to this or that" but there was always an excuse. And then when I spoke to Alvin [Rakoff, her husband], he said she'd changed so much with the cancer and just didn't want to see people.

And Verity, of course, had cancer, but you wouldn't have known she was ill at all. I had no idea. We had a hilarious lunch at a café near her home and ten days later she was dead.

How do you account for the lasting appeal of Doctor Who?

Well, I think it was the brilliance of Sydney for creating the character, and Waris was marvellous as the first director. He was very serious but he'd also have great fun. It was a very lovely job for me. I'm amazed I still get letters. The last thing I did when I was coming down from Aberdeen was answer all the fan mail. I mean I did this, what is it, 47 years ago..?

Have you followed the programme over the years?

Yes, from time to time. I'm astonished to see it today. It's absolutely brilliant, like a great big film. They've really got money to spend, I say to myself every time I look at it. 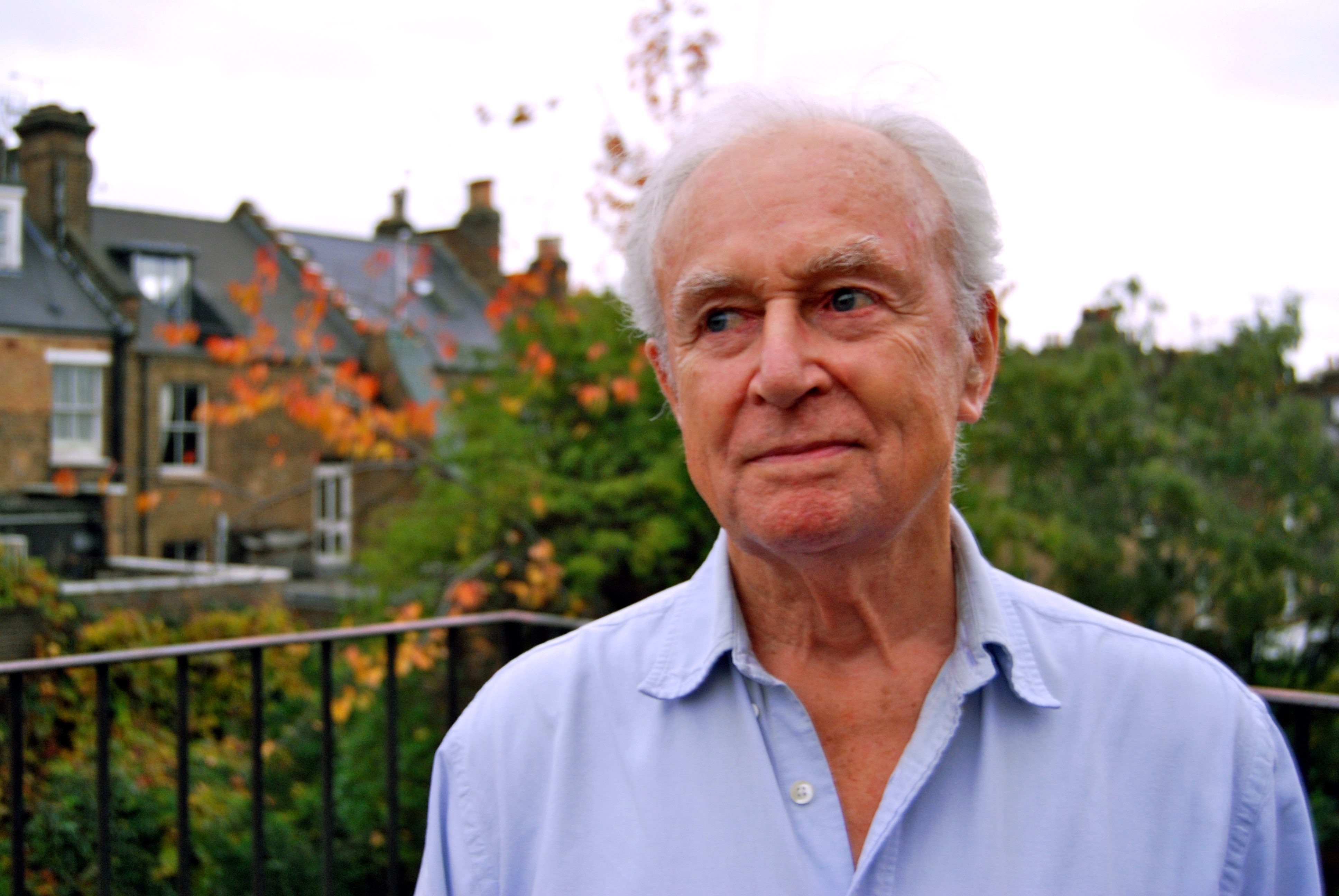